Traveling to Halong Bay, besides spending time lying on beautiful beaches, tourists are eager to get involved in cave exploration.

In 2005, experts newly discovered 23 caves in the area of Halong Bay and Bai Tu Long Bay which makes nature resource of the World Heritage more diverse.

But, in this post, we are going to show you the top 5 caves in Halong Bay which are worth exploring.

So, if you want to experience something fascinating, you're in the right place.

Sung Sot Cave is located in the heart of the World Heritage Halong Bay. As the name implies, from the moment you set foot inside the cave, the scenery and the virtual space inside the cave will make all visitors astounded. Discovered by the French in 1901, the cave was named "cave of wonders".

And rightly so, the Sung Sot Cave was selected by the Czech Association of Travel Brokers and Offices as one of the 10 most beautiful caves in the world. The cave is divided into two main chambers with thousands of stalactites: a large theater-like compartment that can accommodate thousands of people with wide-open ceilings combined with neon lights, this theater is like the surface of the moon.

The second one opens a completely new space: the rich system of stalactites in the ceiling of the cave create objects that are both familiar and unfamiliar to visitors with ancient trees, iconic horse-riding Saint Giong or the image of the bamboo village. All bring the interest of visitors when watching. When it reaches the top of the cave, this place is like a place to swim when the lake is green with many plants and birds live. 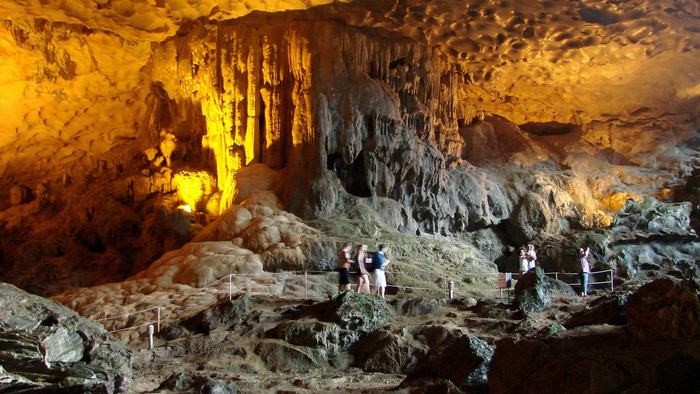 Thien Cung Cave is like a paradise on the ground with breathtaking beauty. Discovered in 1993, Thien Cung Grotto is located on Dau Go Island, about 4 km from the tourist port. This is one of the destinations on Halong Bay tourists cannot ignore.

The way to get to Thien Cung Cave is quite difficult with cliffs and the two sides are covered with trees. However, this stimulates the visitors’ conquest. The beautiful Thien Cung cave covers an area of about 10.000 square meters. It is a complex structure with many rooms and high ceilings and walls. Besides, it is a stalactite system with many unique shapes. The stalactites are the works of art of nature which appear everywhere in the cave. The centrepiece is four large pillars carved delicately.

This beautiful paradise-like cave is one of the places associated with the ancient dragon king. At that time, Thien Cung cave was the place where the Dragon King's 7-day marriage took place with a beautiful girl named May (aka Cloud). To congratulate the couple, all dragons flew and elephants danced, etc., livening up Thien Cung Cave.

Today, when visiting the cave, visitors still seem to be able to admire this bustling wedding scene by the stalactite shapes in the cave.

The end of the cave is an opening space of which the sun can pass through the ceiling illuminates the interior space. The small stream has water all year round with flowers that create a beautiful natural painting. 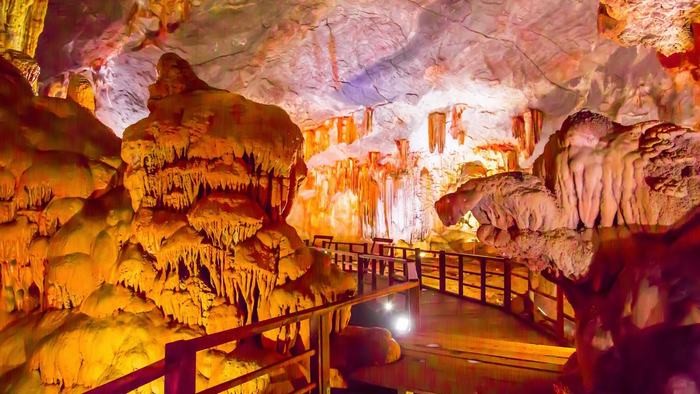 Located on the Dau Go Island, Dau Go Cave is one of the most well-known destinations that tourists cannot miss in Halong Bay cruise tours. In the ancient resistance in the war against Mongolia, King Tran Hung Dao has made a lot of wood stakes to plug into the Bach Dang River and now there are still lots of wooden stakes left there.

Covering an area of about 5000 square meters, the cave is 17m wide and 12m high, located at the altitude of 27m above sea level. It is divided into 3 main chambers with many beautiful stalactites on the walls.

The first one has the shape of a dome to create a large space of which the ceiling is a huge picture and the characters in the picture are "richly" made from the stone to look elegant. In the second compartment, the tourists will have the chance to admire the beauty of the sunshine in the stream. The third floor is located at the head of Dau Go cave, with the highlight is the big columns, honed by the hand of creativity mother nature.

About the name of Dau Go, there are currently three different explanations.

In the first theory, Dau Go cave was originally named Giau Go (Wood Hiden) cave because in the resistance against the Nguyen Mong invaders in the 13th century, Dau Go cave was where Tran soldiers hid wooden stakes before bringing it to place under the Bach Dang River.

In the second theory, Dau Go islands have a quiet area in front of Dau Go cave, so fishermen often gathered here and repaired their boats. Hence, there are many blocks of wood left. Perhaps the name of Dau Go is formed from this incident.

The third theory explains that because Dau Go island is like a giant log from far away. So, based on the shape of the island, people named the cave on the island as Dau Go. 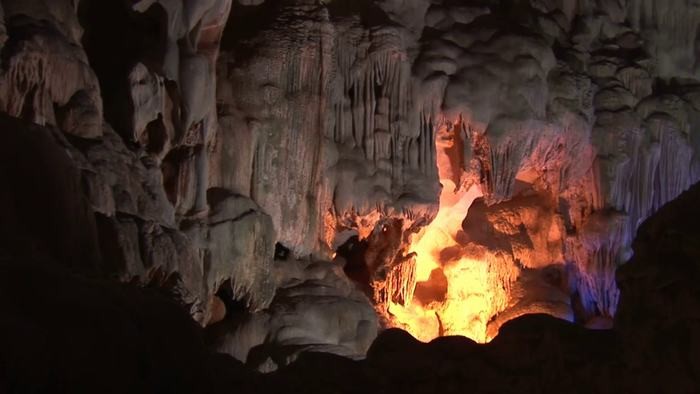 Trinh Nu Cave is located on the island of Bo Hon Island with the Sung Sot cave system, Dong Tien Lake, and Luon Cave. When mentioning Trinh Nu Cave, the locals think of the cave which is just about 750m away. These two caves carry a legend of sad love. Many visitors are curious about this legend, including the local and the foreign ones.

There was a beautiful fishing girl. Her family was poor that they had to work for an owner of the fishing area. The landlord forced her to be his wife but she refused because she had a lover.

Unable to do anything, he sent her to an uninhabited island. On a rainy night, the girl turned into a stone. That was the night her boyfriend knew that she was in trouble and sailed to find her.

At night, thunderstorms hit the boat, making he wash up on a deserted island. In the lightning light, he recognized the girl on another island but his words were taken away by the wind. He hit the cliff with a rock to told her that he had arrived until the blood on his hands dripped. Then, he was exhausted and petrified in this Drum cave.

When entering the cave, in front of the cave is impressed with the image of the girl lying down with the long hair, the eyes looking out to the sea, evoking a sadness as if waiting for something. The eyes are said to be heading towards the cave where the girl’s lover is resting. Therefore, the tourists come to the cave of the Virgin and the Trong Cave cannot only admire the stalactites and beautiful sight but also hear people here tell the tragic love story of this young couple. 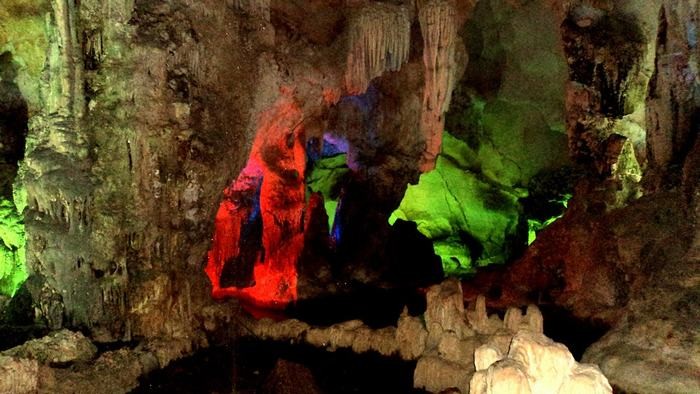 Me Cung Cave is also one of the most beautiful caves in Halong Bay, located on Lom Bo Island, about 2km south-west of Ti-Top Island. The entrance to the cave is small but opens up a magnificent space with a multi-compartment structure that makes visitors feel like they are stuck in a maze with lots of sophisticated stalactites. This is also referred to as the palace of the Persian emperors.

There are still many other famous caves in Halong Bay, but above are some of the most amazing ones in Halong Bay right now. Hopefully, you will have a wonderful time visiting these caves in the near future.

For more information about travelling to Halong Bay, you can visit our website. If you have any questions, feel free to contact us. Share this article with others if you find it useful. Thank you!