With over 3000 floating rocks on the water of Halong Bay, it's not surprising that the coincidence’s occurred at this place, there will be some rock shapes in Halong Bay that look resemble human or an object from ordinary life.

But surprisingly that a visitor can spend few minutes to tilt his head and find the right perspective, realizing that it’s a thing you hold every day.

While kayaking through the rocks of Halong Bay, finding abnormally shapes of islets is a refine spice for your tour to Halong Bay, creative thoughts and background stories are what make Halong Bay dish tastier.

So, let's see what they are!

Locate at the southwest side of Halong Bay which off Bai Chau beach about 5 kilometers and growing 10 meters above the sea. Although the name of this rock is Fighting literally it’s about two fowls are about to kiss each other. Apart with the signature landscape of Halong Bay, you may see this rock appeared on every Halong tourism catalogs, it was discovered from the very first days of the bay and weathered throughout years of erosion. 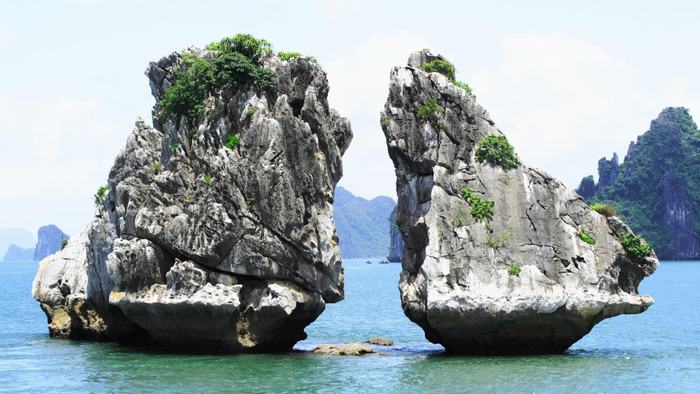 Until now, Trong Mai Rock has been changed its shape significantly, but still, two large volume of rocks face each other which created a bi-perspective whether they’re fighting or giving love, they’re still standing there, relying on each other backs, lasting for millions of years.

The locals tend to name everything they see and so does with Three Peaches Island. But there’s a story to explain why people called them peaches, not apples or other round-shape fruits. The name originated from a myth that a fairy from heaven had met and fallen in love with a poor but industrious fisherman in Halong Bay. She had a desire to turn her lover into immortal, to do so, she stole three divine peaches and was being caught by the jade emperor. The punishments are turning those peaches into stone and separating them forever.

As you travel here from the cruise or kayaking at the nearest port of Cat Ba which is 22 kilometers away, three limestone with round curves at the height of 23 meters, rising from the sea and covering a small lovely beach where you can stretch your body. 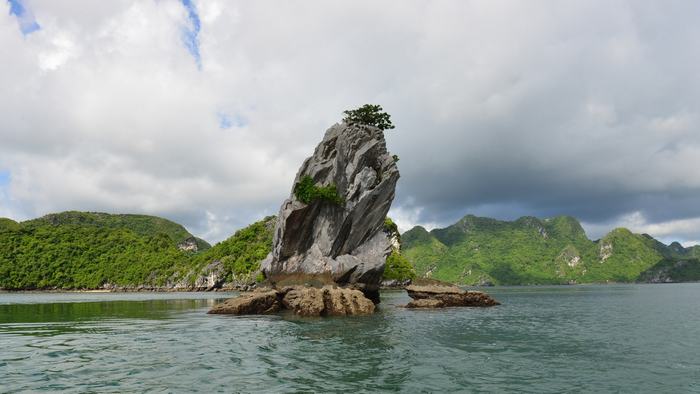 Not too far from the shore of Halong City and in the middle point of Cat Ba Island, a rock was plunged with slightly slanted 70 0 degrees with the small foundation. Let your imagination flow, and with the right angle, you will see a stone frog sit on the water and head up to the sky.

Despite the size and name to a creature that considered as a peaceful creature but people told a definitive reference that every time the frog grinds its teeth, there would be an upcoming rain. The story is about: 3 consecutive years without any drops of rain, so the frog decided to go to heaven and ask for the rain.

On the road, the frog had met many animals with the same situation, so they gathered into a group and overcame many impediments from the jade emperor. With the frog’s persistence, they have finally been granted to have rain whenever the frog grinds its teeth.

This islet may give you some pulsating moments with its name and shape, but for me, it resembles the most to the “Human Head” name. The more I spend my mind to this island, the more amaze I received, how coincidence it is for a large volume of rocks be eroded from million years into something like human head which is extremely rare to be taken after. 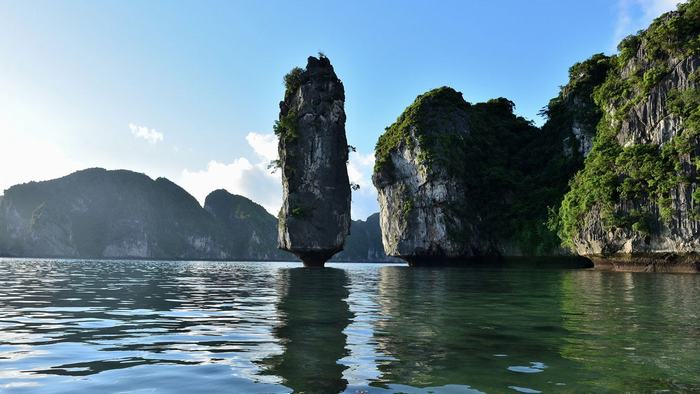 Both of the islets have the same surprising element for the tourist; it’s the structure with a small foundation that preserved the standing stance through the storms and erosion. These are the evidence that proved how nature had been far out than human in architect and building techniques.

With Hon Dua, it’s a straight thin stone jabbing through the water, and after several millions of years, its feet have been shrunk down as we see today. Hon Dua’s 15 kilometers away from Bai Chay to the east.

Hon But gets me more amazing for its gradient. The reason why do people called Hon But instead of another Hon Dua is because the angle it lays is perfectly fit with the image of pen brush in Confucianism. It’s not hard to locate this islet since you can visit Hon But and Ba Trai Dao Beach on the same occasion, taking 30 minutes to sail from Frog Rock to this islet.

We hope that after reading this post, you will understand more about the magnificent beauty of Halong Bay. Let's take Halong Bay tours and explore by your way. Visit our website to get further information about this beautiful bay and leave any questions you have. Thank you!